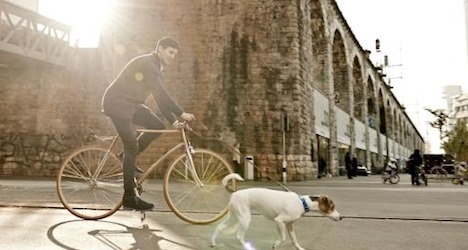 Zurich’s Kreis 5 may be the antithesis of the idyllic Switzerland shown in tourist brochures, but that uniqueness is proving a draw for tourists and residents alike.
The once abandoned industrial quarter has undergone a remarkable transformation in recent decades, helping revamp the image of Switzerland’s largest city from conservative and sleepy to trendy and modern.

Lonely Planet named Zurich one of its top 10 cities this year, assuring visitors that the locals really do know how to party, including in Kreis 5’s after-dark hotspots.

Visitors have traditionally flocked to the city’s main street, Bahnhofstrasse, with its posh watch shops, fashion boutiques, banks and breathtaking views of the lake and mountains.

Kreis 5 lies in the opposite direction, offering grittier vistas of the railroad tracks on one side and the Limmat River on the other, with an eclectic mix of businesses, flats, art galleries, hip restaurants and lovely parks randomly squeezed in between.

This part of town is still very much a work in progress as construction continues unabated.

It is expected to record the biggest jump in population in coming years, according to Zurich’s 2013 report on the social sphere.

“It’s the least Swiss area of Zurich,” says Michael Fontana-Jones, who chose the area to open his British Cheese Centre, a store selling British cheese and other specialities such as fudge and jam.

He points to the international crowd who have made Kreis 5 their home, as well as the neighbourhood’s creative and edgy vibe.

“It’s really refreshing: you turn a corner and there’s a slightly different feel.”
While Kreis 5 is now confidently coming into its own, a quarter of a century ago it faced an existential crisis.

The city of Zurich is divided into 12 different districts, named Kreis 1 to 12.

Kreis 5 emerged as the city’s industrial quarter in the 19th century because of its handy proximity to the main railway station and to the river.

By the end of the 1980s, however, industrial production had largely come to an end in this part of Zurich.

The area became notorious for its drug scene, including the infamous “needle park” which attracted addicts from afar in the late 1980s and early 1990s.

In 1993, Kreis 5 went from being a “secret” for insiders of the art and alternative scenes to a destination for the broader public when a movie complex opened in the neighbourhood.

In the ensuing years, the western part of Kreis 5, known as Zurich West, underwent significant redevelopment.

In 2002, a handsome former shipbuilding factory, Schiffbau, was converted into a theatre, restaurant and jazz club.

Numerous high-profile developments have since followed in the area including the Löwenbräu Areal, which houses art galleries and apartments in a former beer factory, and the chic shops built under the arches of a railway viaduct, known simply as Im Viadukt.

The Prime Tower, Switzerland’s highest building at 126 metres, was built on the grounds of a former cogwheel factory.

Tenants, including bankers and consultants, started moving into the office tower in 2011.

It’s not only locals who are increasingly discovering Kreis 5. Zurich Tourism, which offers guided tours of the area, confirms that the profile and popularity of Zurich West is “consistently growing.”

“The modern, trendy and creative side of Zurich is drawing a lot of interest and buzz, including from guests who didn’t know that side of Zurich before,” said Milena Brasi, a spokeswoman for Zurich Tourism.
Amid the ongoing construction boom, the city expects the population in Zurich West will jump more than 25 per cent from 2012 to 2022.

The redevelopment has also made the area better off, with the median taxable income “clearly” increasingly in the past ten years, according to a city report.

Indeed, the area around the Prime Tower is full of well-dressed professionals dining out at trendy spots.

Prices for renting and buying flats in Kreis 5 are “slightly” higher than the Zurich average because of all the new, upmarket buildings, according to Robert Weinert, an analyst at real estate consulting firm Wüest & Partner in Zurich.

Despite the area’s recent change in fortune, Weinert believes there is still progress to be made in terms of it becoming an established residential neighbourhood, like other older districts in Zurich.

As more people move in, new restaurants, bars and shops are popping up.

One of the new business owners, Michelle Burke, chose to open her cupcake boutique in Kreis 5 in September 2012 because it has the “coolest people, life and restaurants,” and the rent is not exorbitant.

Customers who drop by Michelle’s Cupcakes for a treat — “Red Velvet” is the top seller — include workers from nearby offices as well as people from other parts of Zurich and further afield.

“Kreis 5 has really established itself,” Burke says. “It is a trendy area.”

Fontana-Jones, who sold cheese at the weekly market in the main train station prior to opening his store in 2010 in the upscale indoor food market at Im Viadukt, agrees.

He says the area’s image has steadily improved with all the redevelopment, and with it his sales.

“There was the old hangover from the rest of the people in Zurich, especially on the east side of Zurich, that didn’t want to come down here,” Fontana-Jones says.

“There was still that old perception of this being a dangerous place to come to,” he says.

“That helps a lot,” Fontana-Jones added. “It’s becoming more of a chic place to come.”

Chic, perhaps, but with a rebellious streak, as evidenced by a father and his young daughter who pull up to Im Viadukt on a bicycle and cart stamped with the words “cars stink”.

Kreis 5 is not the Bahnhofstrasse after all.